We all have that thing that we love, that thing we’re passionate about, that thing — a dream, perhaps — that never really seems to leave us. It’s something we hold on to, it’s always in the back of our minds or tugging at our hearts, just waiting to unfold once the right circumstances are presented to us.

For Ariell Johnson, that thing has been comic books. More specifically, it has been her dream of opening a place where you can chill and read them. That dream came to fruition in the form of Philadelphia-based Amalgam Comics & Coffeehouse, which specializes in comics, toys and figurines, games, comic-related magazines, apparel, coffee and espresso-related beverages, as well as baked goods. The shop is a “celebration of geek culture. A place for comic book fans, hardcore gamers, movie addicts, television connoisseurs and zombie apocalypse survivalists to meet — and with their powers combined — change the world a little bit.”

Surely, changing the world (even a little bit) is no easy feat, but Ariell, a Baltimore native and the first black woman to own a comic book store on the East Coast, is doing her part in striving to bring more diversity to comic book culture.

An avid fan of comics since she was in high school, Ariell dreamed up Amalgam in 2003 while she was in college, studying accounting at Temple University. Yet, as she explains, she wasn’t able to actually start the business at that time, so she graduated in 2005 and held a series of jobs in and out of her specific field of study.

“I worked at Walgreens for about three-and-a-half years, and then I moved into an accounting job at a nonprofit counseling center,” she says. “From there, I transitioned into another accounting job for a grassroots newspaper in West Philadelphia, and while I worked at that particular job, I was a barista at a specialty food shop here in Philly to get some coffee experience.”

black girl, create: At what moment did you finally say, “It’s time to open this shop”?

Ariell: There were three moments that led me to that moment. The first one was me being unhappy in my career and unfulfilled at my job. In addition to that, my mom had been sick for a number of years, and when I was 28, she passed away. That feeling of unhappiness and then losing my mom made me start questioning what on earth I was doing. She was 57 when she died. I lost my dad when I was 16 — neither of my parents made it to 60 years old. You start thinking — I may not have as much time as I think, so what am I going to do with my time? I don’t want to waste it. There were things that my mom and dad wanted to do in their lives that they didn’t get a chance to do. That had a big impact on me.

The last moment was a conversation I had with my brother-in-law and sister. I was talking about something going on in the Marvel cinematic universe, and I remember being really annoyed and passionate and fired up about it. And my brother-in-law jokingly said, ‘You know, the only time you ever get excited is when you’re talking about comic books or dance’ (because I dance in my spare time as well). When he said that, I took it the wrong way because, personally, I had been struggling with being satisfied in my career. I was feeling like my interests were childish because that is what the outside world tells you. I think it was my quarter-life crisis; I was thinking, I’m still collecting comic books — I should be doing more grown up things! So, when he said that, I thought he was pointing out that I needed to get more adult interests. But my sister stopped me and said, ‘That’s not what he’s saying. He’s saying that if those are the things that excite you, then you really need to think about that.’

Those three things happened simultaneously, and they solidified my decision to move forward and try to make Amalgam evolve from this thing that I talked about — my own little personal pipe dream — into a reality. 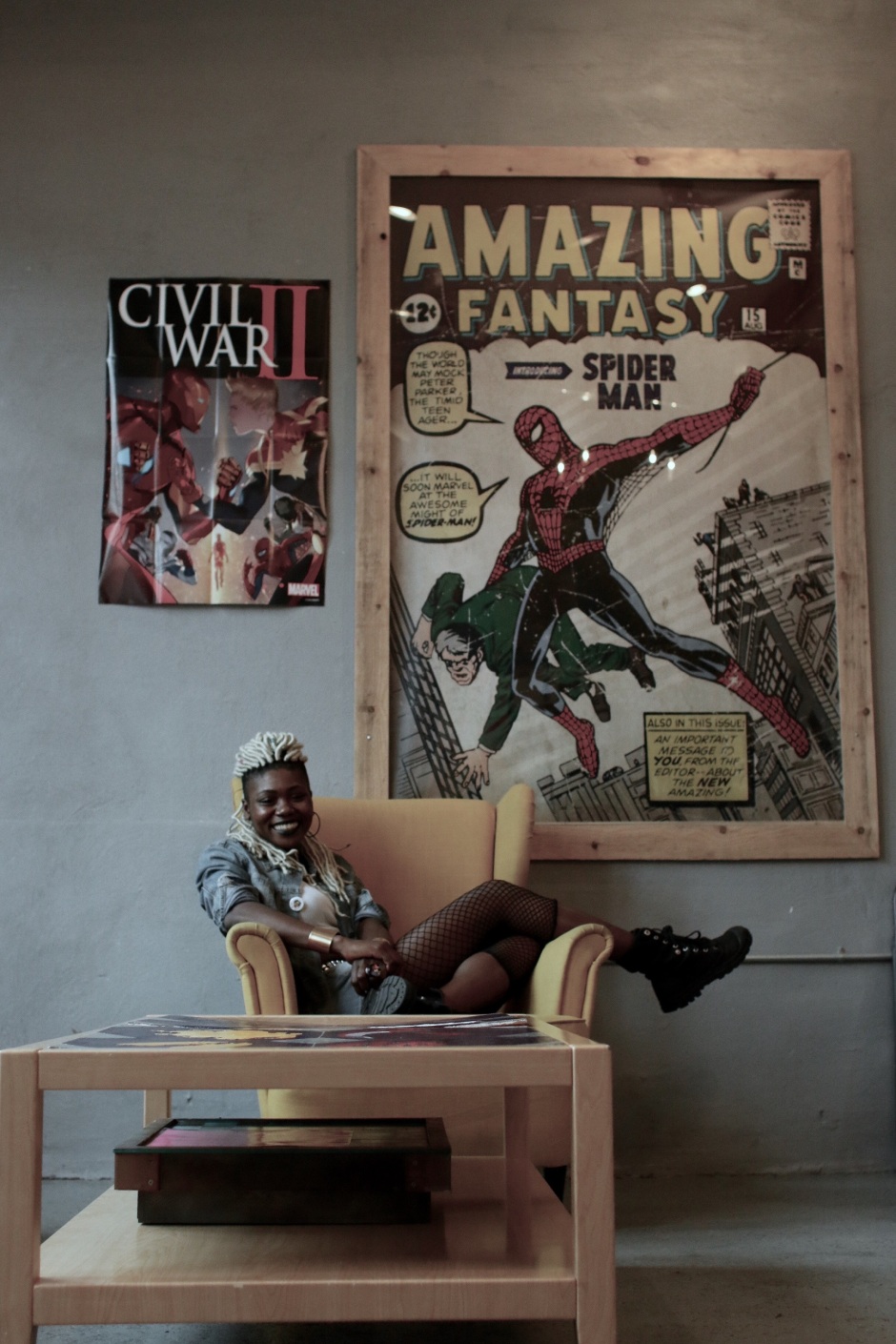 Amalgam opened in December 2015. What lessons did you learn as a business owner within your first year?

To stay flexible. The shop is still fairly new, and I had an idea of what it would look like to run it, but that has not been the case at all. It looks very different now, and a part of that is because of the attention we’ve received [because of the Invincible Iron Man variant comic book cover]. Initially, I had a local neighborhood focus, and I still do, but we’re also seeing the demand outside of Philadelphia from people who want to support our store. So now we’re working on our website and online store because, initially, I decided to rely solely on social media. I figured that since our interests would be local, anybody who wanted to support the shop would actually come in. But now I’m seeing the larger potential for us to have sales throughout the country, and we’re working to make that a reality.

Going back to when you first started reading and collecting comics, did you notice that there were not many other black girls who shared this interest?

It was definitely something I was aware of. Anytime you go into a comic book store, as a black woman, nobody inside looks like you. Comic book culture can be kind of elitist, too. It actually took me a while to go into my first comic book store. I’ve always been aware of the fact that I was not the norm in a comic book space, but I think the internet has made it clear that there are a lot of us. We might just be more spread out, or we might not feel comfortable going into shops or speaking candidly about our interests in those things. Initially, when I wanted to open the shop, I wasn’t thinking about the representation focus, but as you see the way the world works and the treatment of people who are “different,” I was compelled to help with that narrative.

Storm. I was introduced to her via X-Men: The Animated Series when I was 11 years old. That was a big deal for me because, up until then, I’d never seen a black woman superhero. It makes you think about all the little white boys out there who have Thor and Spiderman and Batman, etc., but when you look like me, you’re struggling to put two names together — we don’t know about black women superheroes. So, when I was thinking about the store, I knew I didn’t want the next generation of little black girls to be 11 years old before they found a hero that they could identify with. Seeing faces that look like yours is important.

On Amalgam’s Facebook page, the shop is described as a “safe haven for all of geekdom.” It seems as though people nowadays are embracing their “geekdom” or the fact that they’re a nerd, whereas in the past, these terms had more of a negative connotation. Why do you think that is?

People are proudly proclaiming to be a geek or a nerd because they’ve always been. They are taking pride in it now — they just may not have felt comfortable saying it before. I think about it in terms of when people started to proudly proclaim their blackness. It’s not that we hadn’t always been black, it was that the world made us ashamed of being black, and this is us saying forget that — I am black and I’m proud, and now I’m going to proclaim that in everything. You just want to let people know you’re not shying away from who you are anymore. Particularly in the black nerd community, I feel like we are the ones who have had to be more on the low with our interests, especially if you’re a woman. But with us emerging from the shadows, we’re saying, we’re black but don’t pigeonhole me. I can be black and like science, and I can be black and like comics, and I can be black and be socially awkward. You can be those things.

If you could share one piece of advice for other black girls, what would it be?

To be yourself. When I started to figure out who I was and I walked in that proudly, it was just a really cool thing, and I’m happy that I was able to do that. Really figure out who you are — take the time to understand that. Don’t be afraid of it, and don’t let people shame you for who you are or the things you like. Embrace and love yourself.

Begin typing your search above and press return to search. Press Esc to cancel.